http://sexyadultvacations.com/post-with-right-sidebar-layout Another Salvation Time advancement concerns pop culture and in particular, cinema. The character I used to explain the changes is no doubt a very familiar name since he’s one of the most successful Hollywood film directors in history: Steven Spielberg. As with Charles Manson, it’s Spielberg’s descendant in 2412 who explains the difference between End Days and Salvation Days film production during the Step One’s history exam:

ungovernably “First, tell us Mr. Spielberg, what was the role of the filmmaking industry as controlled by Hollywood in the United States during the End Days, compared to its current role now in Salvation Days?”

“Well sir, like Henry Kissinger said, during the End Days there was really no difference between Hollywood celebrities and politicians. Both groups were ruled by the self-directed big ego. They piled up obscene amounts of money while they kept people in the dark about what was really going on in the world. Joseph Stalin told us about his ancestor who made propaganda films to trick Russian peasants into believing he was leading them into a new dawn of prosperity when it was really the opposite. He was using cinema like a weapon against them in his quest for domination.

“During the 20th century Joseph Stalin said, ‘America is like a healthy body and its resistance is threefold: its patriotism, its morality, and its spiritual life. If we can undermine these three areas, America will collapse from within.’ Making movies was one of the best ways to do it because you couldembed the indoctrination in entertainment. And people wouldn’t even know what was happening. Back in the 1930s when Ronald Reagan was an actor he saw what was going on and he started to fight back against the communist takeover of Hollywood. In the 1950s Senator Joseph McCarthy investigated and found evidence of communist infiltration within the United States government. Some saw Reagan and McCarthy as patriots but many saw them as crazy conspiracy nuts.”

The student paused for a moment before picking up on his teacher’s nonverbal cue to continue.

“But now in Salvation Time the filmmaking industry promotes our worldwide system of positive capitalism. Instead of turning people who do bad things into ‘anti-heroes’ or victims of an ‘unfair’ system, it tells stories of everyday people who do good things for others through their service. It produces films that inspire, educate and uplift because Salvation Time cinema wants   audiences to be inspired to do these things in the real world. The goal is to encourage them to imitate the examples of ordinary heroism and honor they see on the big screen.

“Instead of covering up truth and promoting excessive immorality, those who work in the film industry now make a good living by producing virtuous movies that people really want to see. And it’s ok to make films that portray a positive image of God and those who worship him. During the End Days, most believers were portrayed as crazy.

“So in Salvation Time, creating cinema is all about doing the right thing even though it’s tough. It’s courage over fear, service over self-centeredness.”

Later on in the dialogue comes a slightly controversial interaction involving one of Spielberg’s most acclaimed movies. One of my 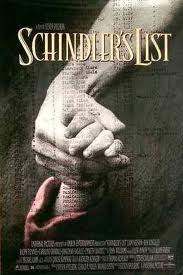 beta readers took exception to my characterization of Schindler’s List but I stand by my opinion and welcome readers to comment in the thread after this post if they wish to debate it.

“Now for your bonus question, what was your ancestor’s role in all of the Hollywood propaganda during the End Days?”

Spielberg transitioned from euphoria to disappointment because he knew his grade hinged upon total honesty in telling the story of his shameful ancestor. This guy had been one of the most fêted men in Hollywood who’d amassed a fortune by promoting lies and hiding the truth in his well-received films. Still, the student was aware that coming clean was the best way to aid in the process of restoring the Spielberg family name so he set about making his confession in front of his teachers and classmates.

“Sir, my ancestor Steven Spielberg was one of the most successful, adored and wealthiest filmmakers in Hollywood during the End Days, even though his movies were filled with propaganda and lies. Take his popular film Schindler’s List. Spielberg insisted that the movie be filmed in black and white so he could whitewash evil.  He didn’t want to ‘offend’ anyone by accurately portraying Nazi crimes against the innocent. Considering that Spielberg was also a Jew, this was even more disgusting. But his main motivation was money. He didn’t want to risk losing a fat paycheck for honestly telling the story of Jewish oppression by socialist Nazis who blindly obeyed a madman.

“So that’s why my family was expedited to Arusha after the Armageddon Commission—to begin to make up for the sins of our ancestor Steven Spielberg, a man who valued money and fame over truth. He makes me very ashamed.”

Again, there’s much more to this answer than what I’ve published here so when you read the book you can expect greater detail. In the Salvation Time  movie industry it’s not the actors who get the most money and fame but the people who finance the films and the diligent behind-the-scenes workers who make it all possible. People like camera and boom operators, make-up artists and engineers. During the course of his personal and spiritual development in the novel, the student Spielberg will face more than a few moral dilemmas requiring him to use his free will for either good or evil. You’ll have to buy the book to find out what he chooses.